Osunfunke, female alter ego of Morpheus,
dips a calabash into the great pond
and offers it to the famished voyager.
“Drink, and replenish your thirst from the
river of dreams. Then wake to act.’

The ascent, slow wave. Nonvisual, ruminative.
The forgotten dream, but polysomnographs do not lie.
Black Jack, climbing down the brain-
stem, fleeing the money market ogre.

I am the spiny anteater, a monotreme.
I alone have solved the riddle of dreams.
Hide your fears in symbols…..

In the third watch of the night I, Scipio,
saw many nations at the edge of the World
Bank, waiting to drown in a river of debt.
Each people elected their own boatmen to
ferry them into the bowels of the forbidden river.

The gulf of transition, before the descent.
Sleep spindles, wave forms, 14 to 16 Hz,
interspersed with high amplitude K complexes.
Alpha waves, uncoil, recoil, the new delta waves.
The royal road to the unconscious is paved
with mathe-matical symbols. Cymbals.

But not in Darfur, not Beslan, not the Gaza
Strip, stripped of semiotic elegance.
Only transformational-generative hell.
Here dreams wear the toga of bloodreality.

The rapid eye of the moving camera reel
assembles snapshots, a kaleidoscope of image-events.
PGO waves. Limbic ones, kicking limbs as neural
analogs of obsession, Hippocampus,
horse of memory, mare of the deep, deep night.

Take drugs for these parasitic oscillations. Purge
you of nostalgia, of childhood, where fantasies of
innocence met a willing god in the fulfillment
of primeval wishes. Orisa ewe, ma p’egbe awa lekun. 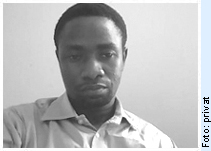