2.
When Morris Imposternak throws his round shield
Down during, say, the battle of Philippi or something

Who knows what poems, what true propositions
Will rise out of the sticky, fragrant loam?

If he were a monist philosopher,
His principle would be monism,

But it’s hard to believe your own thoughts
And phenomena can be so distracting...

And books can be so disheartening...
And anything can be just so anything:

Or take the phenomenon of love:
He felt such tenderness towards you,

Yet, since no one from the scientific community has ever explained love to              everyone’s satisfaction,
Scientists fall in love or do not fall in love

This is true. It is also true
That where there’s tenderness, there’s suffering:

Hence when we say that an elbow is tender,
It means we have a booboo,

And money, announcing itself as “legal tender,”
Causes suffering, but in such a way as to absolve the beneficiary thereof from        responsibility therefor.

Look at the sea! Don’t you think that the sea too suffers
When it pulls up its skirt at low tide

And shows the varicose veins, the ingrown hairs, the splotches
Along its cold, pale, swollen, hypertensive leg?

It is possible that ideas don’t suffer—
Such as the idea of suffering, for instance,—

But we are not ideas, are we?
Morris Imposternak, at least, is not an idea. 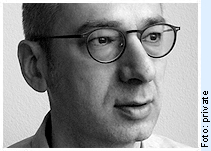