It’s about beauty, really,
being at home for a few days alone.
The summer’s run is drawing to a close,
and I observe the way a common bird
floats like a hummingbird above the lilies.
It is late afternoon, moist air oppresses
this fragile neighbourhood, and I alone
am answerable for the shade I cast.
Light glitters from the lone remaining wing
of a dragonfly--its cast-off shell
still clings to the stalk
that leans above the water.
This is the house of former poems,
the house of endangered new ones.

With special thanks to Goethe-Institut Washington/Timeshadows

This has to do with the beauty
of staying at home on one’s own for a few days:
Summer’s approaching its deadlines,
and I watch an ordinary bird
keeping to the lilies like a humming bird.
It’s late afternoon, a damp air lies
over this fragile neighbourhood,
and I myself am responsible for the shadows
I cast. In the light there gleams the single
wing of a dragonfly –
its former body still clinging
to the stalk above the water.
This is the house of former poems,
the house of imperilled new ones. 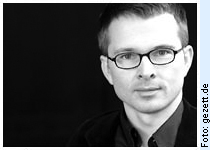