Snug underground in the civic worm burrowing
west, I was headed to class when a cadet
in full combat dress got on my train.

But for a pompom sprucing up the beret,
his age, the fact he was alone, and here,
this boy could’ve been boarding amphibious

landing craft. I checked for guns, grew pious
of this spinning orb’s hotter spots. He
was all camo, enactment-of-shrubbery, semblance

of flora in varying shades, hues, mottlements
of green. A helmet dangled on his back, a hillock
in spring, sprouting a version of verdant grasses

in plastic. I got past enjoying a civilian’s recoil
from things military, brutal, conformist, and took
a peek at what my soldier was so engrossed in —

Thoreau’s Walden — imagine him, rubbing oil
into a Sten gun’s springed bolts, working through
his chances at a life away from men: berries

plumping in among their thorns, night’s
curtain drawn across the window of the lake . . .
We must reconcile the contradictions as we

can, but their discord and their concord
introduce wild absurdities into our thinking
and speech. No sentence will hold the whole

truth, and the only way in which we can be just
is by giving ourselves the lie; speech is better
than silence; silence is better than speech; —

All things are in contact; every atom has
a sphere of repulsion; — Things are, and are
not, at the same time; — and the like. There are other

minds. Surfacing at St. George, I cupped my hands
and blew — bodies scattering among museums,
bank towers, campus rooms, and shops, each

to where they’re thinking of or not, seemed
to prove a law we’re locked into, demonstrable
with iron filings, magnets, and clean tabletop.

I can watch their faces go away. The singing’s not
to record experience, but to build one viable
armature of feeling sustainable over time.

The stadium’s lit, empty, and hash-marked
for measuring the forward push. On the surface
of the earth are us, who look in error, and only seem. 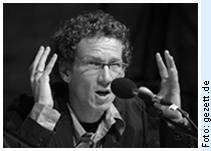