[then, toward noon, the first]

then, toward noon, the first
sounds rise from the street.  the slapping of hands
against cloth, children’s chatter.  on the grounds
between apartment blocks, calmer
movement.  shadows roam, air jostles,
the gaze traces the outlines
on the slope beyond the garages.  fence-slats
narrow nettle fields, behind them the glitter
of the new buildings’ facades.  briefly now
the wind lifts, builds,
blows sand between the hills,
bright and marked to the edge
with signposts, close to the security zone
that stretches out across the plain, barely distinguishable
at the control stations. remnants of trees remain
wire mesh expanses, the shadow of the wind turbine
flaps above the rooftops 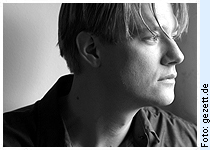