I am addressing this communication to the future,
In the hope that a soul, pliable enough,
Shall be moved by it.
For I am the last person
Left on earth.
It is not easy for me to say this,
My words will be doubted,
But the evidence speaks for itself,
And I won’t be fooled.
I have been colonized
Through the nose, through my mouth,
Through the ears and anus,
By the lowest, meanest of powers.
But I cannot die.
Yet I have been forced to behave like a corpse,
In order to endure the voices and rays
That fill my body.
Sound travels through me like light through glass,
And I have been the stage
For the unholiest of turmoil.
One has to imagine my existence!
For a while, the right arm contained a gel-like mass
The size of a cherry,
And my feet tiny, hard-working men
Trying to pump the verteral column out of me.
The outcome was that this vital part of the body
Left in the form of clouds through my mouth,
Mainly during walks in the park.
Oh, ever since God made me his business
There has been no end to the pain.
Naturally, these afflictions were difficult for all,
For the nurses, the doctors,
My wife and others,
Provided, of course, they were real beings.
But I have been courageous.
Shouting at the top of my lungs was the first action I took,
Refusing food the second.
When nothing more could be done,
I allowed myself to be “demasculinated”:
My sex shrunk until it vanished,
Hair was pulled from my face,
My breasts turned heavy.
There I lay, a lecherous woman,
As if meant to be taken.
Since then, years have passed,
There has been great torment, bitter pain,
Hardship scarcely of this world,
But now I feel the end is nearing.
After twelve years, only the head is left of me,
In additon to these syllables I count as my last
— Straws of air, scarcely more.
Am I an angel or idiot?
Perhaps a trifle of nothing.
But do I not have the right
To be master in my own skull?
Fortunately,
I have a trump to play.
The great calculator still thinks
That being alive,
You must exist in a certain place.
As the first person in the world,
I have realized this is not the case.
I lay in my bed at the clinic,
The wind playing tag with the curtains,
As I sensed the distinct feeling of passing away.
Yet demonstrably, I was still there
— For who thought this thought,
I thought,
And realized rescue was in dispersal.
Suddenly it became clear that shelters and trenches
Had been of no use.
The devil may creep through a keyhole, too.
Only hollows and voids will help:
Windows must be opened,
Drafts allowed to rule,
So that nothing may fill one’s thoughts.
Then the air will carry the spirit.
My wild music!
To be not one, but many is life’s richer rule.
Thus I have multiplied
Through numerous entries and exits.
As molecules of oxygen,
I will lay dispersed in the farthest of lungs.
As before, rays will fall through window panes,
But henceforth be brought into confusion.
“Heavens,” they will exclaim,
(For rays in motion talk),
“This is a being with many heads!”
And then not know where to go.
A corpse is a dead end,
Is it not,
But good reflexes may save the situation.
In their interplay, I shall be born again,
No longer body but climate,
An aggregate for countless theatres.
Thus I shall be the first to desert
From the common order,
But myself will nowhere be found.
One day, new beings shall grow from my spirit,
This authentic devastation,
Perhaps in the vicinity of the planet Phobos,
In orbit around Mars,
That is called Outer Mongolia.
Neither man nor woman,
I shall then be the stuff
Of which vividness is woven.
As you may understand,
Your possible Excellency,
The only requirement
Is that I be granted an audience.
In this spirit,
I sign Daniel Paul Schreber No. 2,
Former President of the Senate,
Dr. jur. Daniel Paul Schreber,
Accidentally in Leipzig-Dösen,
In this, the Lord’s Last Year, 1911.

In 1903, the former president of the senate in Dresden, Daniel Paul
Schreber, published an account of his stays in a series of mental
asylums in eastern Germany. Die Denkwürdigkeiten eines Nerven-
kranken soon made their author “the most quoted psychatric patient” in
history. The foremost aim of the document — to account for his situa-
tion and once again be declared sane — Schreber accomplished:
granted full legal rights, he was set free. After his wife suffered a
stroke in the fall of 1907, however, Schreber once again was com-
mitted, this time to a clinic outside of Leipzig. Very little is known
about his last years. On April 14, 1911, Schreber died in his hospital
room. In an appendix to his book, entitled “Considerations with Re-
gard to the Future,” he explains the popular belief that “the devil may
creep through a keyhole” by stating that, “in reality, there is no me-
chanical protection invented by man that may prevent rays from
penetrating. In each moment, I experience this in my own body; no
wall, no matter how thick, no closed window or such like can prevent
the rays from penetrating in a manner incomprehensible to man, in
order to reach any which part of the body, but primarily my head.” —
A couple of hundred years earlier, in a pamphlet on “the principles of
life,” another citizen of Leipzig, G. W. Leibnitz, argued that monads
without body are “deserters from the common order.” 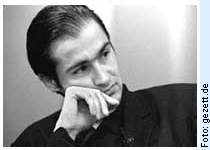