are flying, and they bark a little, inwardly,  they wave and flutter, sail. For a long time these two islands had no mammals other than a few bats that had fetched up in this forsaken place.  Everything was feathered or scaled, armoured, shelled, encased. Then the canoes came ashore, and the rats and dogs came with them.  Animal souls. The souls of trees.  Whole families of foreign gods settled in. And their scions multiplied, names and songs, the souls of things.  The native birds just couldn’t cope with people. Often the people couldn’t cope with people.  But now, out into the whiteness of the cosmos! says my Alien.  As a distraction, since at that very moment my toe had stubbed a fistful of dead feathers, a sparrow as if sleeping, marched over by a regiment of ants. In Tolaga Bay we were already tripping over one another, syllables and seedlings, blind behind dark glasses. The glasses, too, were barking, inwardly. 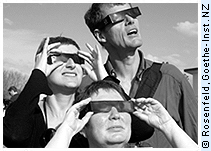