To Sezer and her city

In your green memory on the banks of the bay
The fern of sorrow bends for you, wicks of dusk like a thousand lamps.
Fish find despair under the Byzantine Pillars,
Amphibian like us, they hobble on a land of day
In a night memory, a placenta of sleep, I talk, but you
Do not allow us to reach answers of water

In your ancient imagination you see the blood cycle of the city
One leg a Golden Horn,
The other blue as the Bosporus,
Between her legs the sea of marble
Spreads for those who are lost like us, in a sliver light,
In a veil of a thousand moods,

On every journey the ebb and flow burst
Frail cities of childhood float, in your memory,
The roads of Asia, charcoal ponies
On red mountains of desire,
In your memory made from Aram Damascus, glamour of a great bazaar
Voiceless, the people sing:
"A blind man, and a cross-eyed man, only two know
How to make Damascus sweets"
And the sugar toy store goes up in flames.

In a vision of the Yakub coffee house the goddess of stories
Tezer Uzlu, looks down from the wall, with half a smile-
White as the tulips of Istanbul she takes half the love
With her death, you remain in air paved
With longing

In your orphan hood pictures and a child's clothes congeal
Bound in a suitcase of the empire
Under the light of childhood, like a tail of happiness
Stained with fears

In your imagination you resurface from the depths,
Listening to the curse coursing hidden through the city's veins
You rise in a wedding dress made of specks of dark rain
And the moon of Istanbul is swallowed in dark matter:
You sing: "drops fall on your hair
To become a rainbow in my heart", and cross the city
To call out our names between the banks

For you alone the shades of Asia tip over
And Europe is a transparent girl leaning on a lost ox
The voices of song, abandoned in the water gardens
Will turn into boats gliding on the sea of steel
In the freezing air, the ivy of time is revealed
As in the street, the eyes of the blind musician open
To see the fairest woman in the city
Only to lose his song.

The sorrow of sunset hangs like eternity's ornament
Above you, slowly, the city will evade the freezing air
By looking at the sky you won't be able to tell a thing
Only at dawn is it possible to cross the Golden Horn following the heartbeats
And we
Will be too late

From the north, white winds wrap around the necks of houses,
A Muezzin in prayer tells night from day
Waking the hyacinth of morning's heavy feeling
From your industrious hours of sleep

The rule of the dream will never change:
A child stretches out his arms, with no reply:
Only sea rages in the body. 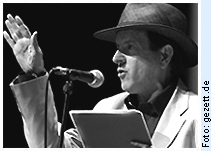