Muzzle-nuzzles.
Kisses on the nose.

A drift of dusty perfumes.
Barley-breath.

‘ Let the smiling circle of your shield
be the only face they fix upon.
Let it twirl before you,
a bright umbrella dazzling,
for you to strike unnoticed from its rear. ’

A soldier’s ungloved hand
fanned to the disc of a horse’s cheek
unbuckles the bridle.

‘ Let spear-tip be your tongue
protruding, taunting as it pokes
and waggles, till
they are affronted by its brash simplicity.
Then let fly your word upon its point. ’

A slap upon the rump,
the horses trotting hover-footed
to the lonely wood that hedges the field.
Huddled in among the mossy boles
with heads held low they peer out
blinking at the war-band’s muddled ranks.

‘ Inscribe your arrow-shafts with marks of love
that, following their aerial ballet,
dig into the bosom of their beau. ’

A boy in his rebuffed excitement
cooing to his blue-winged hawk;
tickled below the hard hook of its mouth,
its gold-ring gaze refuses to meet his.

Extending the upswing of his wrist
its light weight lifts,
is balanced on the brightness of the air,
allows the world to fall, to pivot,
and with the sharpness of its flight
positions the tree-top beneath it;
there to turn its back and pause and preen.

‘ When unabashed they rush to meet you
embrace them with broadsword,
with daggers caress,
till they wallow in the wetness of your kiss. ’

In among the many: Eadric,
teenaged kinsman to the earl,
with tea-towels padding the sag
of his hand-me-down mail;
only half-heeding the speech’s instruction,
of what is to be and not to be done,
tucks in his shirt and swallows his gum
to whisper his own words of comfort.

‘ Mum said to stand harder than oak,
so if they come on like a gale-force wind,
well, I shan’t be so easily uprooted. ’

Cresting the high banks
beyond the crowd:
the patchy yellow-blossomed gorse.

The ever-wind-blown willow,
backcombed branches
dipping to the weight of little birds.

‘ She said fear grows of ignorance,
how, unprepared, they’ll be more scared of us. ’

‘ Stick with the prince
and with the fight
and do your best
and come back home again. ’

Beyond the stream, the slope, the fringe of trees:
the Viking horde —
who limber in the summer sun,
touch toes, check pulses, sip hot soup,
laugh at foreign jokes in foreign tongues.

‘ Come blood and muscle-ache and grown men’s screams,
there’s nothing will make me doubt my mother’s word. ’

“It begins with crows,
black flecks against the blue,
like bits of bin-liner flapping on the wind;
like a mould spreading over the sky.
Two hundred pearl-black eyes,
black tongues in black beaks,
waiting for men to be meat.


It begins with an increase in noise,
as at the start of an orchestral interval:
the slow surge of coughing and audience chatter,
each new sound trying to out-sound the other;
as on a track as the train approaches,
what was mere hiss becomes a hurricane,
undirectional, the scream and suck of air,
earth-shake, fist-pounded shields,
a covering of chaos for each ear.


It begins with spears,
with javelins, arrows,
anything slender enough
to thread the gap, to darn
with a weaver’s precision,
casting fast and low
to loop through the fringes and back.
But the sides are forever shifting
and the needles miss their marks,
the meshing uneven, entangled lines
down which the casters tentatively trace,
knives out to unpick the knots.”

J. O. Morgan (born 1978 Edinburgh) lives on a small farm in The Scottish Borders. In 2009 he won the Aldeburgh First Poetry Prize with his book-length poem about a young boy named Rocky from the Isle of Skye. The lyrically treated biographical sketch “Natural Mechanical” excited the jury with its complex yet accessible handling of a personal history. Morgan’s texts move between truth and fiction, tradition and individual perspective, and distinguish themselves through a dexterous use of various verse forms. 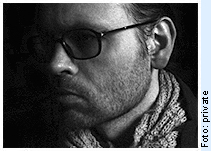 Foto © private
Following “Natural Mechanical”, the poetry collection “Long Cuts” was published in 2012, and was nominated for the “Scottish Book Award”, and in 2014 the disturbing reworking of the Anglo-saxon text about the Battle of Maldon in 991AD “At Maldon” appeared.