Gollop was our grandmother’s butcher.
Saying his name out loud, you swallowed
a lump of gristle whole. Even the thought
of going to Gollop’s made us gulp,
made my little green-eyed sister’s eyes
grow rounder, greener. Swags of rabbits
dangled at the door in furry curtains;
their eyes milky, blood congealed
around their mouths like blackcurrant-jelly.
You’d to run a gauntlet of paws.

Inside, that smell of blood and sawdust
still in my nostrils. Noises. The thump
as a cleaver fell; flinchings, aftershocks
as sinews parted, bone splintered.
The wet rasp of a saw. My eyes
were level with the chopping bench.
Its yellow wood dipped in the middle
like the bed I shared with Rosy.
Sometimes a trapdoor in the floor
was folded back. Through clouds of frost
our eyes made out wooden steps, then
huge shapes shawled in ice— the cold-store.

Into which the butcher fell,
once, bloody apron and all.
When my grandparents went to see
Don Juan, and told us how it ended
—Like Mr Gollop! I whispered.
Mr Gollop only broke his leg, but
Crash! Bang! Wallop!
Went Mr Gollop!
we chanted from our sagging bed,
giggles celebrating his downfall,
cancelling his nasty shop.
As the Co-op did a few years later
when it opened on the High Street.
Giving him the chop. 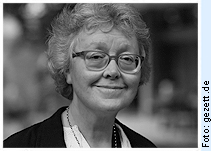