I joined the thousands at Matthew Goniwe’s funeral,
carrying burning flames of righteous indignation.
And on that day
I saw my first communist flag:
borne above the dust
by the army of the dispossessed.
And I felt so connected.
The flag was the sun rising in the east
like the dawn of a new day of justice and equality.
All our pain carried away on the wings of a freedom song.
What innocent hope, what sincerity.
our raised fists in the innocent air ringing with freedom songs.

Innocence until the police opened fire on the crowd, first with teargas
then with live ammunition, and the crowd surged towards
the cop car like a hungry beast and pulled a black policeman out
and quicker than you could say state of emergency,
threw a tyre over his neck,
doused him in petrol and set him on fire.
And we cheered because
here was our power, burning flame
destroying an agent of the dark conspiracy
that kept us chained to our shamed identity.
Sashisa impimpi, sashisa, sashisa!

This day branded me with a warning:
emotions, long bottled, breaking free
cause destruction. A cycle of pain
coming back to haunt us again.

One two, buckle my shoe,
pamphlets were the petrol bombs I threw
three, four, the prison doors
closed on our hoping fingers.

Phillippa Yaa de Villiers was born on February 17, 1966 in Halfway House close to Johannesburg. She studied journalism in Grahamstown and theater in Paris. In the late 1990s she returned to university to earn a degree in dramatics arts, thereby combining her two passions, writing and performance. She also spend some time in Los Angeles, U.S.A., before she returned to settle in Johannesburg.

De Villiers makes her living by working for theatre, teaching and writing for stage and television. As a poet she has performed her poetry all over the world, f. e. in Adelaide, Havana, Birmingham, Durban, Stockholm, London, Berlin and Johannesburg. 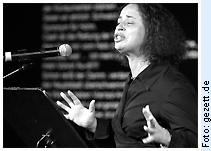