But all sex is barbaric. We are the pleasures we enjoy, the blisses we admire; and all sex is a text, wingbats in a gaping slang. I adopt Hazlitt's position on the immortality ode because my mother was an alcoholic.

Freud said that my early biological hermaphrodism led to my original predisposition to bisexuality, which in the course of my development was reduced to monosexuality, leaving slight remnants of the stunted sex. The idea of development truly is formidably legitimate; and yet it is only the first of many ideas, each one more legitimate than the next. My infancy was an original predisposition to sexual love for children, which over the course of our development was reduced to sexual love for teenagers, and then, as if conclusively, to the same for adults; the elderly are terminally attractive but I would rather not suck them. Infant love is as durable as life. If it isn't, it must be. Immortality must mean the preterition of ageing, so that universal love may be comprehensive, that is, paedohebeëpheboteleiophiliac (omitting the elderly, who are ostentatiously not immortal); the sum of all disorders is the law of paradise. You can disagree with it but you can’t disobey it. That's the bottom line.

Already in 1995, Sutherland together with Andrea Brady founded the publishing house Barque Press where many of his books were published. His major 2007 poem Hot White Andy has been reviewed as "the most remarkable poem in English published this century" (Jacket).
Beside his poetry Sutherland has published numerous essays on poetics, politics and philosophy and is the editor of the QUID journal (Barque Press) for poetics and critical theory as well as of the complete critical prose of J.H. Prynne. 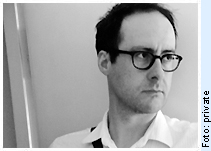 Foto © private
He has been invited to read in France, Ireland, Germany, Belgium, Finland, China and the USA, and his poems have been translated into many languages including German, Greek, French, Finnish and Chinese.

Together with his colleagues at the University of Sussex, Sara Crangle and Daniel Kane, Sutherland runs the Sussex Poetry Festival since 2009 , an annual two-day celebration of nonconformist and avant-garde poetry and music in Brighton, UK.
Keston Sutherland lives in Brighton and is also a part of a Brighton-based band named Pence Eleven.